Rachel Savage covers LGBT+ issues for the Thomson Reuters Foundation and Openly, and to mark LGBT+ History Month, we spoke to her about the beat she and her team cover year-round.

You report on LGBT+ issues all over the world - what are the greatest challenges in covering so many countries?

Keeping in touch with our correspondents and sources around the world can be a juggling act, especially across different timezones. I tend to cover stories in Europe more, for that reason. But I have covered everywhere from Australia to Israel and the United States from London, via phone, WhatsApp and email. Building trust is incredibly important when covering LGBT+ issues and that’s always better done in person, so we try to commission correspondents and freelancers or travel, where possible.

Another challenge is the different language LGBT+ people around the world use to describe their sexual orientation and gender identity and how to convey that to a global audience. For example, New Zealanders often use “rainbow communities” in place of “LGBT+ community”, but that’s not a phrase that people from other countries will necessarily understand. It’s important to balance being sensitive and accurate in describing people as they are and how they want, with using words and phrases that can be understood globally. 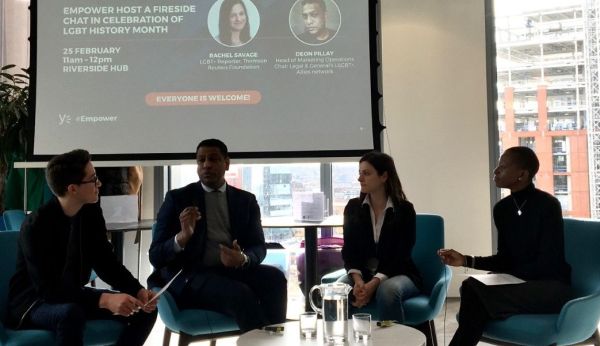 Rachel spoke at a Cision Empower event in London this month

LGBT+ rights vary drastically across the globe – does this affect how you focus or distribute your coverage?

Me and my editor Hugo Greenhalgh at Openly, the Thomson Reuters Foundation’s LGBT+ news site, follow news and keep in touch with sources ourselves from London. But we also rely on our colleagues to keep us up to date and pitch us stories. So we have our fantastic Americas correspondent in Mexico City, Oscar Lopez, the Thomson Reuters Foundation’s excellent general correspondents in places like Delhi, Bogota and Kuala Lumpur, and a network of trusted freelancers.

We also watch how trends develop around the world, so we can accurately reflect the differences in LGBT+ rights. For example, bans on “conversion therapy” (attempts to change someone’s sexual orientation or gender identity) exist and are being considered in many parts of Latin America, North America, Europe and Australia. But forms of the practice are state-sanctioned in some parts of Asia, for example.

I was also looking to develop deep expertise in an area, but with a global remit and the opportunity to travel

Can you talk about what brought you to this role?

Before this job, I worked for The Economist in East and West Africa and was then a freelance reporter, covering everything from elections to indigenous communities in Canada and Christian missionaries. LGBT+ issues hadn’t been a focus of mine, but I was lucky that this job came up at a time when I had a growing interest in the topic. I was also looking to develop deep expertise in an area, but with a global remit and the opportunity to travel. So this job was ideal.

Many LGBT+ people will, understandably, be sensitive about talking to journalists - especially in some countries they will be at risk of violence and arrest if their identity is made public.

Do you have any advice for young journalists, particularly those who are passionate about LGBT+ issues?

Most people are nice and willing to talk to you if offered a listening ear. Be as respectful and professional as you can, even when those you interview may not be, and stay in touch with as many people as you can. You never know when they may be the right person to talk to for a future story or future employer. Two examples – my first job was in business journalism and in 2014 I wrote about how companies should support their trans employees. Many of the people I interviewed for that story are still contacts of mine now. Before that job, I did an internship at the Financial Times. My boss then is my boss now – Hugo Greenhalgh.

For young journalists who want to report on LGBT+ issues, my advice is to be empathetic, patient and aware of the legal and social context you’re reporting in. Many LGBT+ people will, understandably, be sensitive about talking to journalists - especially in some countries they will be at risk of violence and arrest if their identity is made public. You can still be impartial while listening to and respecting people’s concerns.

How does your team like to work with PRs?

Emails tailored to Openly are best. We especially like it when PRs send us relevant press releases under embargo and can arrange interviews with LGBT+ celebrities and other public figures.

About the Thomson Reuters Foundation